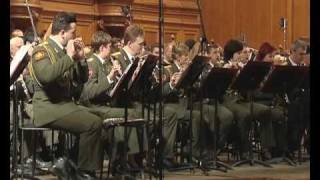 Berlioz's Grande symphonie funebre et triomphale is a work that was "rediscovered" and given a modern adaptation by Richard Franko Goldman. Since that time, the piece has established itself as a staple of the modern wind band repertoire. Below is information on the piece from Wikipedia and a link to a Time magazine article on the work as a "forgotten" piece of music. The piece, rightfully so, draws many comparisons to Messiaen's Et exspecto resurrectionem mortuorum elsewhere 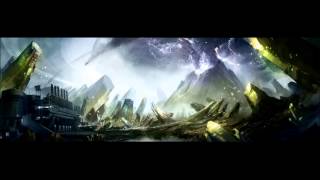 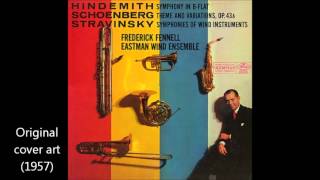 In 1952, when Frederick Fennell founded the Eastman Wind Ensemble, part of the stated mission of the ensemble was the perform pieces like Paul Hindemith's newly composed Symphony in B-flat that were not part of the traditional band repertoire. Since that time, this piece has become a cornerstone of the wind repertoire. Paul Hindemith, Symphony in B-flat Eastman Wind Ensemble, Frederick Fennell, conductor Below are liner notes from the Peabody Conservatory's recording "Trendse

Handel: Fire (and Some Water)

Along with Giovanni Gabrieli's Sonata Pian'e Forte, George Frideric Handel's Music for the Royal Fireworks is one of the earliest and best pieces for winds. This information on Handel came from today's Composers Datebook: "Handel and the Royals" It was on today's date in 1710 that a German composer by the name of Georg Friedrich Händel was appointed Kapellmeister to Georg Ludwig, the Elector of Hanover. The annual salary was to be 1000 thaler. Herr Händel accepted on the cond

Today's post is about "Sleepless Slumber" by Guusje and Puck Ingen Housz. The piece is written for voice, piano, winds, and metronome and was the winner of the Youth Composition Contest for the Netherlands Wind Ensemble's "On to New Year's Concert 2008." These program notes on Sleepless Slumber came from the Nederlands Blazer Ensemble [Netherlands Wind Ensemble] website. A special thank you to Bryan Crumpler for the translation from Dutch to English. You can reach Bryan at ht 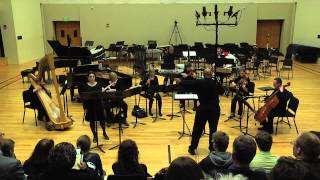 Joseph Schwantner's Sparrows will appear on our first program of the year in September. Joseph Schwantner, Sparrows University of Delaware New Music Delaware Ensemble Wesley J. Broadnax, conductor; Shari Feldman, soprano Below are program notes from the CD insert of American Classics: Joseph Schwantner. Sparrows, was written in 1979 for the Twentieth Century Consort. The text consists of fifteen haiku by the eighteenth-century Japanese poet Kobayashi Issa. Instead of reproduc

As promised, here is Part II of the Matthew Tommasini music that will be part of our February concert. Below are the program notes for Three Spanish Songs (2005). More information, and a recording, can be accessed via Tommasini's website. This cycle is a setting of three contrasting poems by Latin-American poets Leopoldo Lugones, Rubén Darío, and José Martí. Olas grises uses evocative rain and sea imagery to meditate on the nature of life and death. Set as a lyrical, quasi-st

On our February concert, we will have the privilege of working with Matthew Tommasini, a young composer whose work is starting to gain traction in the wind world. The concert will feature two of his pieces, Torn Canvases and Three Spanish Songs. The next two days will feature program notes about each piece as well as full recordings of each that are available for download from his website. Below is the program note from Torn Canvases; additional information, as well as a reco 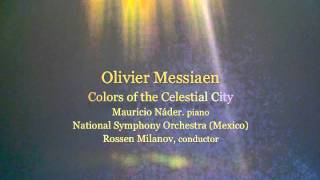 On our final concert of the year, we will perform our second Messiaen piece of this year, and the third in two years. Couleurs de la Cite Celeste was written the year before Et exspecto resurrectionem mortuorum, and portrays colors as represented by the multi-colored wall in the book of Revelation. Below is the program note from Messiaen. Couleurs de la Cité Celeste was composed in 1963, and first performed on October 17, 1964 at a concert at the Donaueschingen Festival under 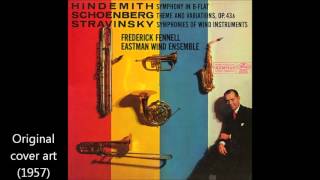 The Symphonies of Wind Instruments, composed in 1920--seven years after The Rite of Spring--is one of Igor Stravinsky's most original and influential compositions. A poor premiere performance (Stravinsky later referred to it as the "execution of my Symphonies in the literal, firing-squad sense") and the work's austere effect meant that it was not greeted with the rioting of The Rite of Spring's premiere. Nevertheless, later composers have been fascinated and influenced by the
16171819
20