The Last Hivemind Shuying Li Born: 1989 Composed: 2018 Duration: 7 minutes The Last Hive Mind was written for conductor Glen Adsit and the Foot in the Door Ensemble at The Hartt School. Inspired by several episodes of the British TV series Black Mirror and the general idea of recent increasing debate around the artificial intelligence and how it will affect our daily lives as human being, I put some of my personal thoughts, standing and imagination into this work. Thanks to G 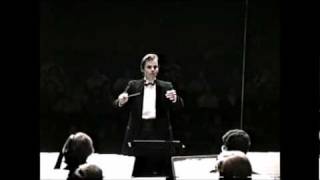 Fanfare after Seventeenth Century Dances Donal Michalsky Born: 1928, Pasadena, CA Died: 1975 Composed: 1965 Duration: 8 minutes Donal Michalsky was a native Californian. Born and raised in Pasadena, he received his DMA from the University of Southern California, studying theory with Halsey Stevens and composition with Ingolf Dahl. After completion of his studies, he chose to remain in the Golden State, teaching composition at California State University- Fullerton, until his

Funeral Music for Queen Mary (after Purcell) Steven Stucky Born: 1948, Abilene, Texas Composed: 1991 Duration: 10 minutes Stucky wrote Funeral Music for Queen Mary (after Henry Purcell) in 1991 for Los Angeles Philharmonic, who premiered the work on Feb. 6, 1992, in Los Angeles. Stucky offers the following regarding his composition: “It was at the suggestion of Esa-Pekka Salonen that I transcribed this music of Purcell for Los Angeles Philharmonic Orchestra. I used three of t

Three Comments on War Jan Meyerowitz Ed. Erik Leung Born: 1913, Germany Composed: 1964 Duration: 10:40 Three Comments on War was commissioned by the Southern Division of the College Band Directors National Association. The melody that serves as “Chorale” of the first movement, an anonymous secular French ballad of antiquity is the folk song “Jean Renaud,” which tells the story of a mortally wounded king who comes home to die. His mother makes desperate efforts to hide the tra 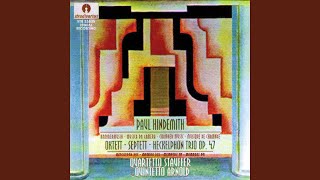 Septet Hindemith Born: 1895, Hanau, Germany Composed: 1948 Duration: 17 minutes As part of our "Immigrants I" program on October, UMWO will perform Hindemith's "Septet", a piece of extremely unique character and instrumentation, which was quite popular in Hindemith's own time. Hindemith wrote it as a newly minted American Citizen, but while traveling back to his homeland following the War. As such, this piece is the work of a true immigrant, presumably with his heart and mind

Paul Hindemith's Konzertmusik, Op. 41, composed in 1926, was, in some ways, written to promote the importance and relevance of wind music in classical performance. Although designed as a piece for amateurs, the piece is certainly challenging enough for professional players - a comparison may be drawn to the Schoenberg Theme and Variations, Op. 43a in this way. The piece is written for a variation on the German military band instrumentation, and has since become a standard of

Millennium Canons Kevin Puts Arranged by Mark Spede Composed: 2003 Duration: 7 minutes Winner of the 2012 Pulitzer Prize for his debut opera Silent Night, Kevin Puts has been hailed as one of the most important composers of his generation. Critically acclaimed for a richly colored, harmonic, and freshly melodic musical voice that has also been described as “emotional, compelling, and relevant,” his works, which include two operas, four symphonies, and several concertos, have

A Child’s Garden of Dreams I. There is a desert on the moon where the dreamer sinks so deeply into the ground that she reaches hell II. A drunken woman falls into the water and comes out renewed and sober III. A horde of small animals frightens the dreamer. The animals increase to a tremendous size, and one of them devours the little girl IV. A drop of water is seen as it appears when looked at through a microscope. The girl sees that the drop is full of tree branches. This p

I wander the world in a dream of my own making Christopher Theofanidis Born: December 18, 1967, Dallas, Texas Composed: 2005 Duration: 8 minutes The composer writes: When Robert Rumbelow approached me to write a piece for wind ensemble for this wonderful consortium commission, I was really delighted, as I had been thinking of a piece for these forces for some time and was eager to try some of the acoustic things that I do in my pieces for symphony orchestra in a different con
1
2345